Thu. March 7, 2019 – Polycorp Ltd. is proud to have been recognized as a 2019 Platinum Club winner of Canada’s Best Managed Companies.

Since having been selected as one of Canada’s Best Managed Companies in 2011, Polycorp has requalified every year since, achieving the Platinum Club status in 2018 and requalifying in 2019.

Polycorp Ltd., named one of Canada’s Best Managed Companies annually since 2011, requalifies as a Gold Standard winner in 2016

Toronto, Ontario, March 9, 2017 – Polycorp Ltd., North America’s leading designer and manufacturer of engineered rubber products for the Mining, Industrial Protective Linings and Transportation industries, is pleased to announce that it has successfully requalified at the Gold Standard designation for 2016.

Established in 1993, Canada's Best Managed Companies is the country's leading business awards program, recognizing excellence in Canadian-owned and managed companies with revenues over $10 million. Every year, hundreds of entrepreneurial companies compete for this designation in a rigorous and independent process that evaluates how companies address various business challenges, including new technologies, globalization, leadership, developing core competencies and hiring the best talent to facilitate and support growth. An independent panel of judges selects the award winners.

"We would like to congratulate Polycorp Ltd. and its entire workforce. Achieving Canada’s highest level of Canadian business excellence takes a united effort and we are privileged to acknowledge such a strong team," said John Hughes, National Leader of Canada’s Best Managed Companies and Managing Partner, Growth Enterprises, Deloitte.

"We are honoured to receive this prestigious award”, said Peter Snucins, President & CEO Polycorp Ltd. “Due to the hard work and dedication of our employees, we have grown the Company by building upon our strong heritage that began with B.F. Goodrich Canada Engineering Products. Our continued growth in all three divisions, coupled with this distinction, validates that we are on the right track." 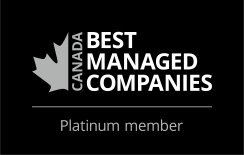